Is ChatGPT the future of Google?

Is ChatGPT the future of Google?

How to Begin a MarTech Blog in 2023? A Complete Guide

Humans are dependable on machines now more than ever. Taking this as an advantage, many organizations have developed technologies that would have left people awestruck five-ten years ago, today people are enthusiastically acceptive of these developments. Standing tall among these organizations is OpenAI, which has made crucial innovations with AI. One such innovation is ChatGPT -a platform that answers your questions conversationally.

ChatGPT (Generative Pre-trained Transformer) is built on the same model as InstructGPT. They both use the Reinforcement Learning from Human Feedback (RLHF) method with slight differences. The InstructGPT is transformed into a dialogue format, and the trainers provided conversations in which they played both, AI and the user. ChatGPT is a better version of GPT-3.5, and the two models are trained on AzureAI infrastructure.

The large language model (LLM) enables ChatGPT to interact and respond to the questions in a human-like manner. It is an artificial -intelligence chatbot that is trained to learn the meaning behind the questions asked by humans. It was launched in November 2022 and has since been trending for the responses it offers for the day-to-day problems of the users.

The creators of ChatGPT used a combination of Supervised Learning and Reinforcement Learning to fine-tune it. The chatbot generates text in a wide range of styles and with exceptionally greater precision, detail, and coherence. At a glance, the major difference between supervised and reinforcement learning is that there is no ‘labeled datasheet’ or a trainer in the latter for the algorithms for any kind of help, they learn to react on their own to the environment. In the supervised model, the trainer is there when something is not right, and they also help with identifying what is wrong, in the latter, there is an appreciation for success, but no reward or trial at failure – which is how the algorithm learns from the environment. What helped ChatGPT bear the fruits of success was the reinforcement learning model.

While this seemingly magical transformation in the field of AI is free to use, people are scared that monetizing it might break the spell. After all, the company that made ChatGPT, is not a charity, though OpenAI did launch as a non-profit in 2015. The makers have warned that monetizing the chatbot would be necessary as the costs to keep it running are eye-watering. 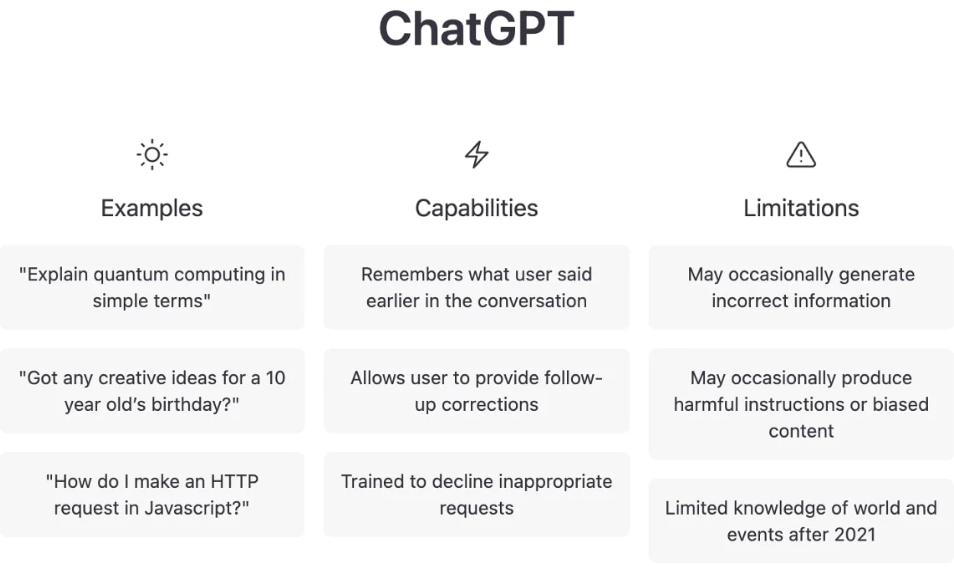 ChatGPT is a versatile chatbot and can assist with almost anything. Twitter users have flooded the platform with images of answers when they asked the chatbot numerous kinds of questions. Here are a few examples of what it can do:

These are just a fraction of the things that the chatbot could do for the users. Depending upon the language and tone used for asking the question, ChatGPT is capable of almost answering every question.

ChatGPT: A threat to Google?

The capabilities of the chatbot forced many leading personalities in the business to consider the fact that it may pose a threat to Google. Brian Novak, the lead analyst of Morgan Stanley, said in a report that ChatGPT may “disrupt Google’s position as the entry point for people on the Internet.” Employees at Google too were worried about missing a tremendous break in the field of AI. Responding to the growing menace, Sundar Pichai said that Google has similar capabilities, but the cost of generating wrong answers would be too high as users depend on Google. In a report by Insider, Sridhar Ramaswamy, who oversaw Google’s ad team between 2013 and 2018, said 81% of Alphabet’s (Google’s parent company) overall revenue could be reflected as the users might not click on its links with ads.

The bottom line is, while ChatGPT is a promising name in the field of AI, it being a threat to Google is implausible. Despite the praises that the chatbot received, a few keen eyes did not miss noticing the errors in the answers. ChatGPT cannot be considered credible as Google, and AI experts back this statement. For instance, Satya Nadella, the CEO of Microsoft, corrected the chatbot when it wrongly mentioned ‘Biryani’ as a tiffin option. Hence, for daily queries, Google still has the upper hand over ChatGPT and instead of paying heed to such threats, the makers at Google are focusing on improving the search engine. How to set up marketing automation in salesforce?

How to Add Bots to Discord Server on Mobile